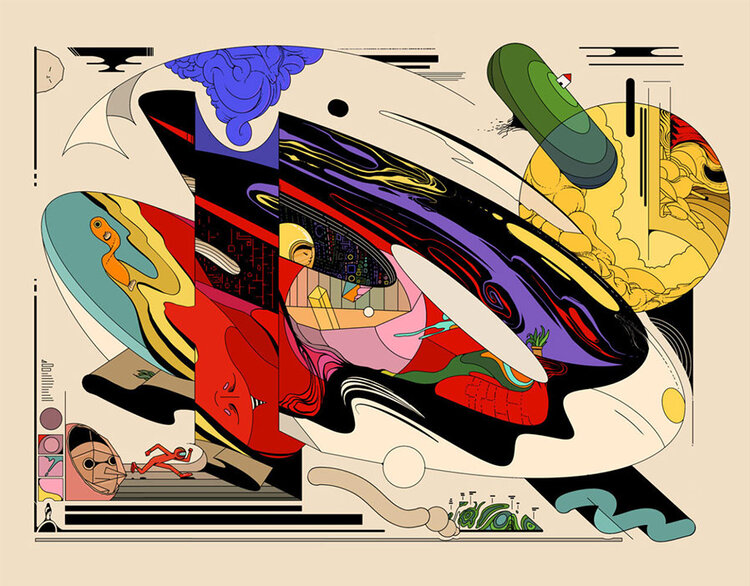 Divinity is the act of fully engaging in the present. We are born awake. Little by little, we learn to break from reality when it’s painful. Our elders teach us how to soothe despair, but what follows is discord. The space between our bodies and our present consciousness expands, as does the distance between other people and us. I’ve mastered escapism by daydreams and television. I’m always running the risk of becoming a stranger to my partner and children.

To make matters worse, I’m seeking self-actualization through others as opposed to my own efforts. I am atoning for my escapism by imposing a higher standard of engagement on my children. Ego is telling me that my children belong to me — they are an extension of me, therefore another chance to fulfill my human potential. Inadvertently, I’m perpetuating the great me/others divide.

Is there a point of no return? No.

Epiphanies crystalize, as my history lays out, timeline-style, on shelves. Rummaging through closets and finding old tapes is like a personal version of coming upon the Dead Sea Scrolls. The music here is no longer on heavy rotation, but I hold it close because it marks a time that formed my generation, even though I didn’t know it then. Much like your native tongue, first job, and every ignored tension make you who you are long after you’ve left them behind.

Sound transports us fast. It’s like non-linear time travel. Fugazi ignites visions of humid summer shows in D.C. and smoking Parliaments on stoops for hours on end. The hollow filter, dark lipstick, and steel-toe Docs. Loving with clenched fists and not bearing to trust. Rage, angst, disenchantment, and the Clinton era. The Riot Grrrl swell too, which I didn’t fully grasp because I was very young then. From the fringe, I watched it take shape at the hands of formidable girls who spoke their truth. They had watched white men control moms, aunts, sisters of all ages. They had reached their limit, awakened to the reality that patriarchy ran the world, and couldn’t care less about women. Their anger morphed into art. Riot Grrrls stormed the punk rock stage and galvanized a movement with a synchronized howl.

To me, they represented freedom. I didn’t attend meetings or put out a zine, but I was bolstered to push back and reclaim my girlhood. Screw those meatheads hissing at us on the street. It was clear-cut: no one had to stand for that. Finding real kinship with other women — for the first time in my life — changed me forever. It permitted me to be myself and not rely on grownup consent to charge forth in a new direction. I turned my bedroom into a studio and plastered it with drawings. I wrote bad poetry and, to my family’s dismay, surrounded myself with other people who expressed their darkness.

You’re a keeper, Fugazi. Waiting Room is still an anthem.

The effects of the movement echo into the mainstream generations later, as we trace Girl Power back to the Riot Grrrl revolution. The raw fury is watered down and tamed to meet the tastebuds of the masses, yes. Back in the ’90s, this kind of pop-culture adoption would have made a punk kid cringe with disapproval. Still, it moves me every time I see little ones chanting girl power. I’m here to see that empowerment happens for real, and not just end up as a commodified slogan on some Gap T-shirt.

It will take generations to heal the divides we’ve carved. I don’t know what to tell my children, other than that truth rises. We can’t escape it because it’s stronger than the ego’s reach. Truth bubbles as an undercurrent, it fuels counter-culture, and it sometimes explodes on a mass scale. Our higher selves culminate in activism and art as a form of social expression. Stay as you are, kids — engaged and awake. Be with life as it presents itself right here and now, from messy to banal and extraordinary. We are one. Rebelling against this truth leaves us lost and disintegrated.

We owe it to ourselves to renew mindfulness as often as possible. To return our attention to the present at every moment. It’s a tall order, but I want to come back into the now. Investigate with intent, ask questions, and peel away the layers of protection that have become a hindrance. I have two gutsy little girls with an intrinsic sense of connectedness and wonder. The question becomes, what conditions nurture equanimity in perpetuity? And how do I create such conditions, starting with myself? Because I can’t possibly nourish little humans if I’m not whole. I can’t teach the children that they own themselves if I treat them as tethered extensions of me.

Everything I left behind links me back to the truth that’s always existed. As a blueprint, it shows how the pieces fit together to make up a life. Why some paths came naturally, and others were an uphill battle. Sitting with all this makes gratitude and nostalgia well up together. I’m not trying to be schmaltzy, but impermanence colors everything. I’m longing for moments as they unfold in real-time. It’s an interesting proposition to appreciate, rather than dread, this impermanence. To develop a sense of urgency that makes me more present, not less. As I touch the idealistic pieces of my adolescence, I reconnect with my capacity to exist fully.

Ioana Friedman is an art director and Editor in Chief at The Daring. She’s led digital creative at Estée Lauder Companies and e.l.f. Beauty and has served in a creative capacity at Magnum Photos and powerHouse Books.