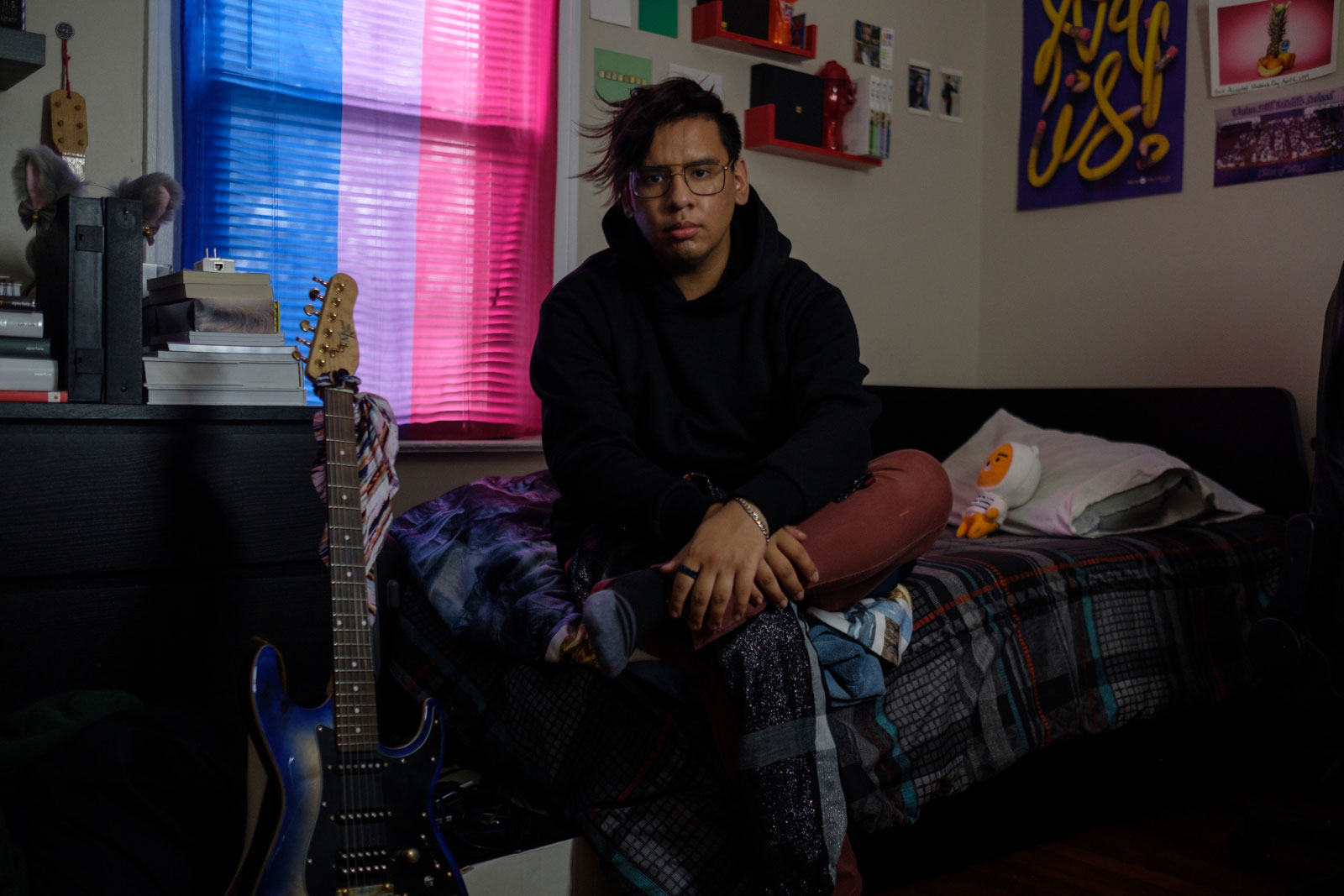 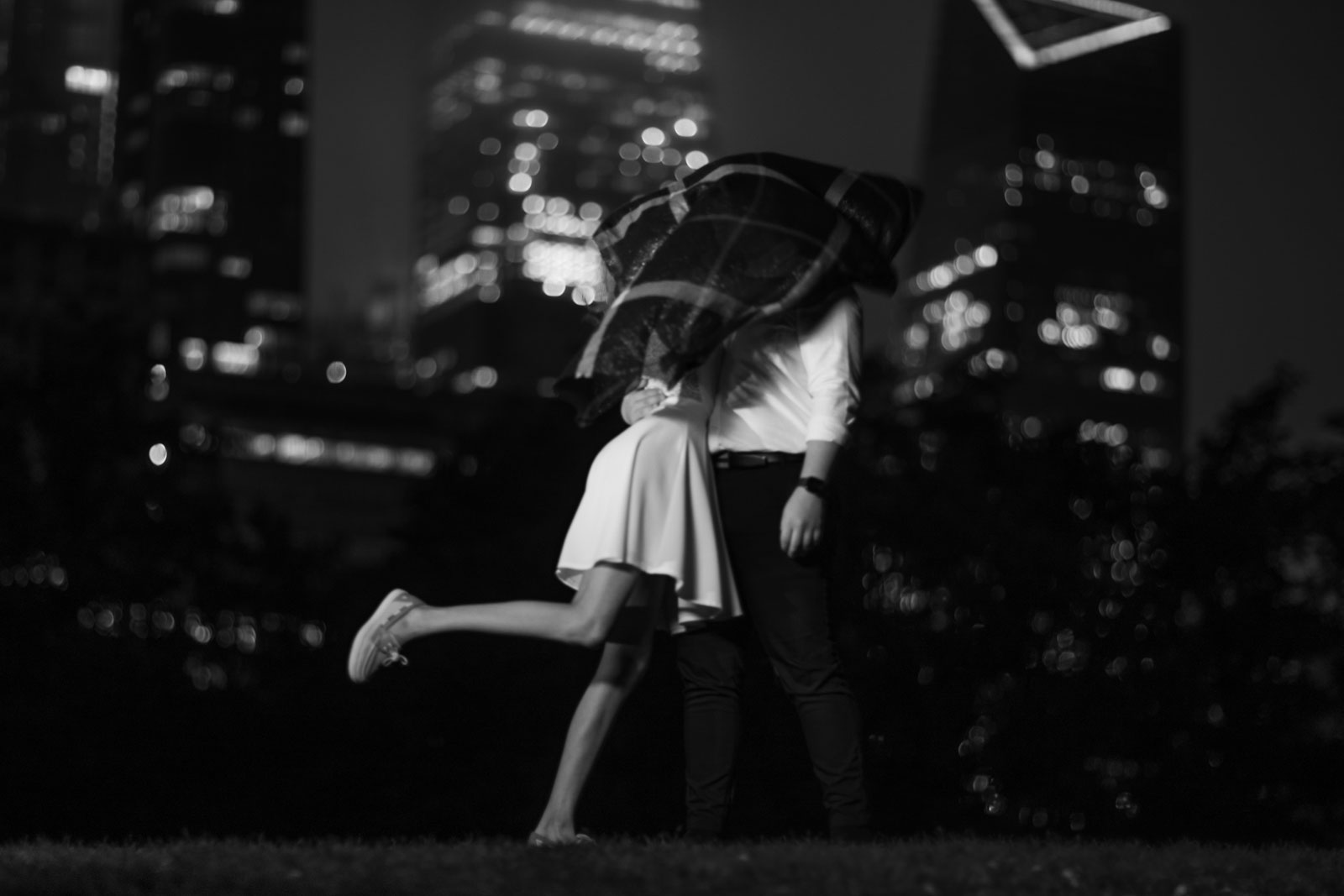 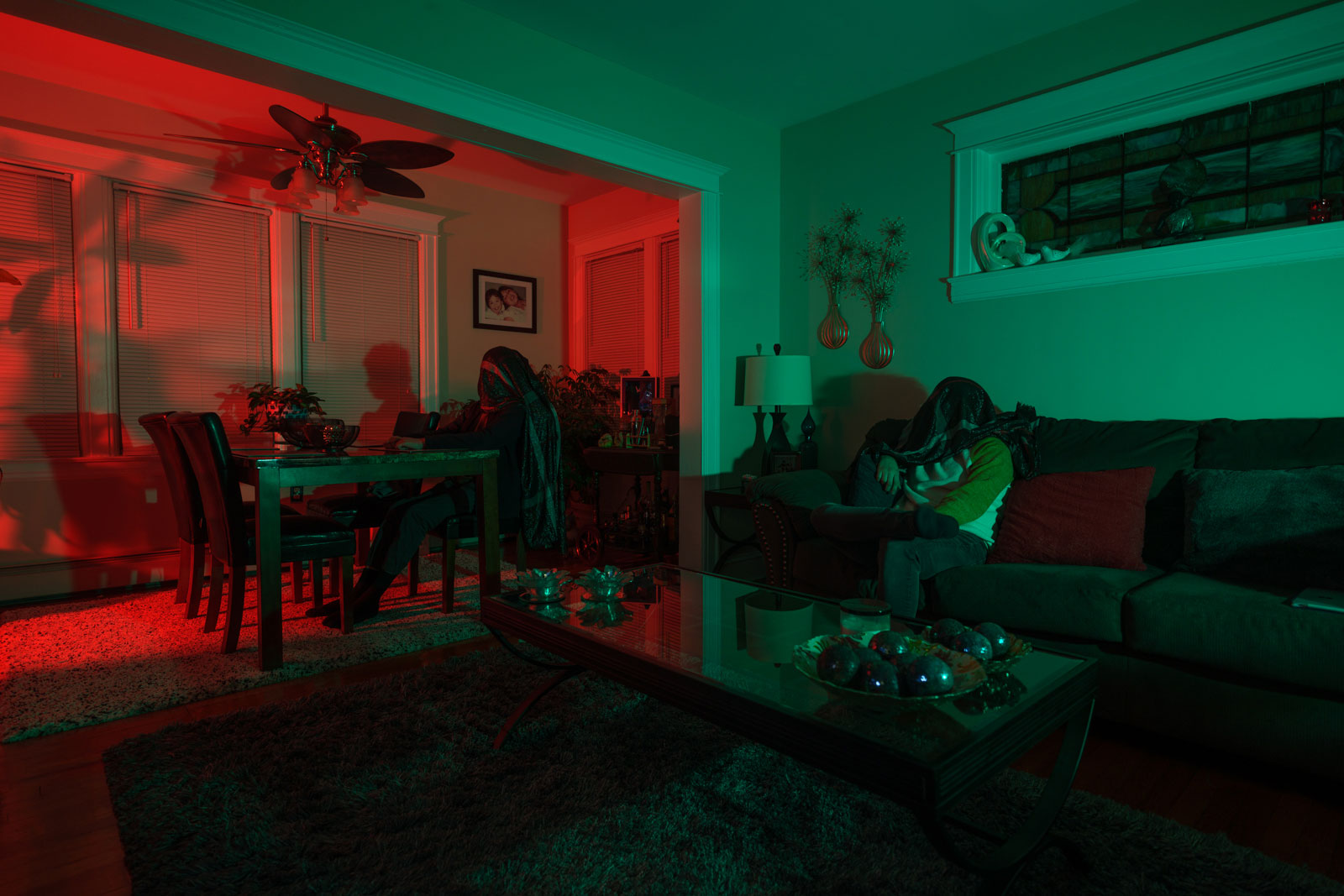 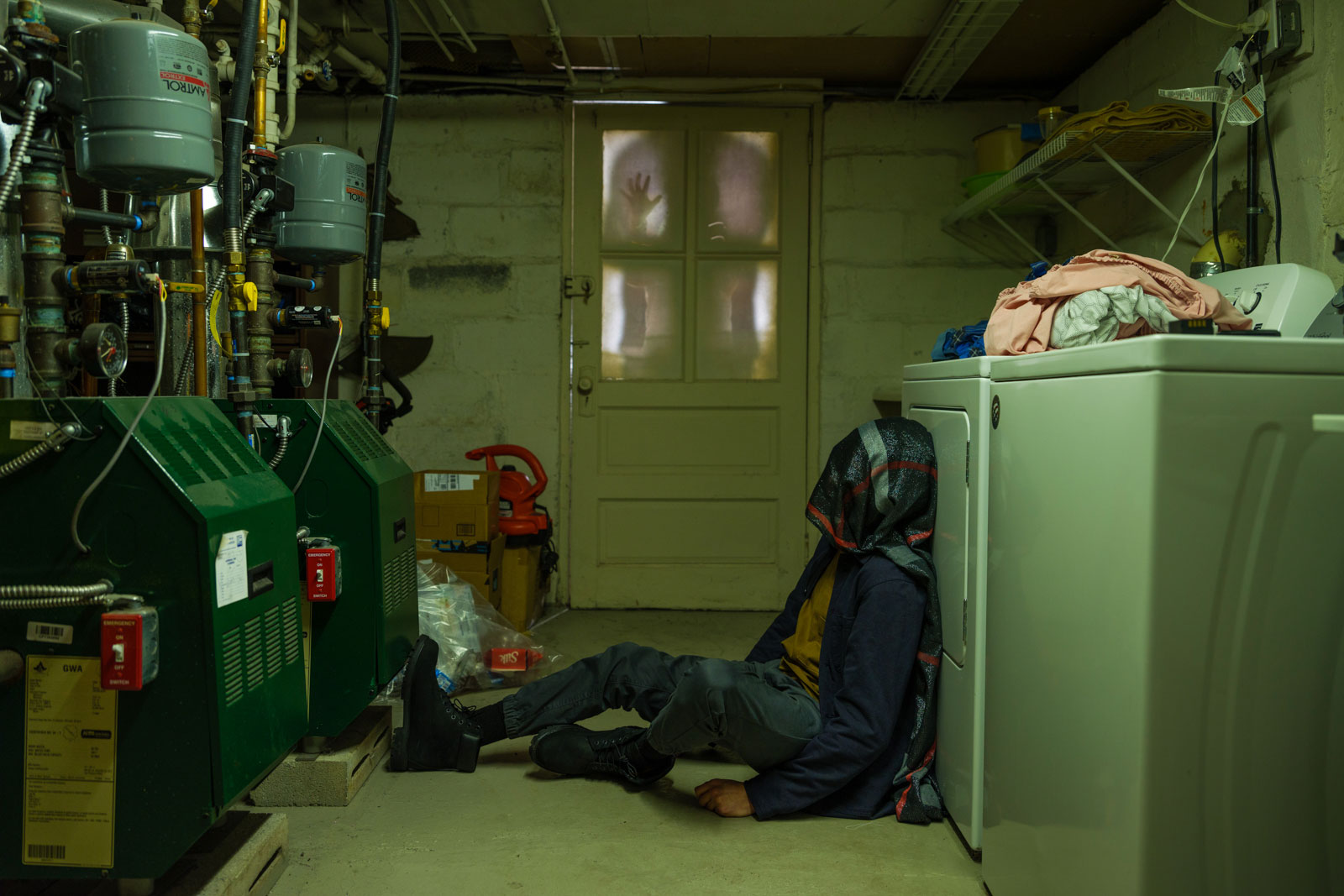 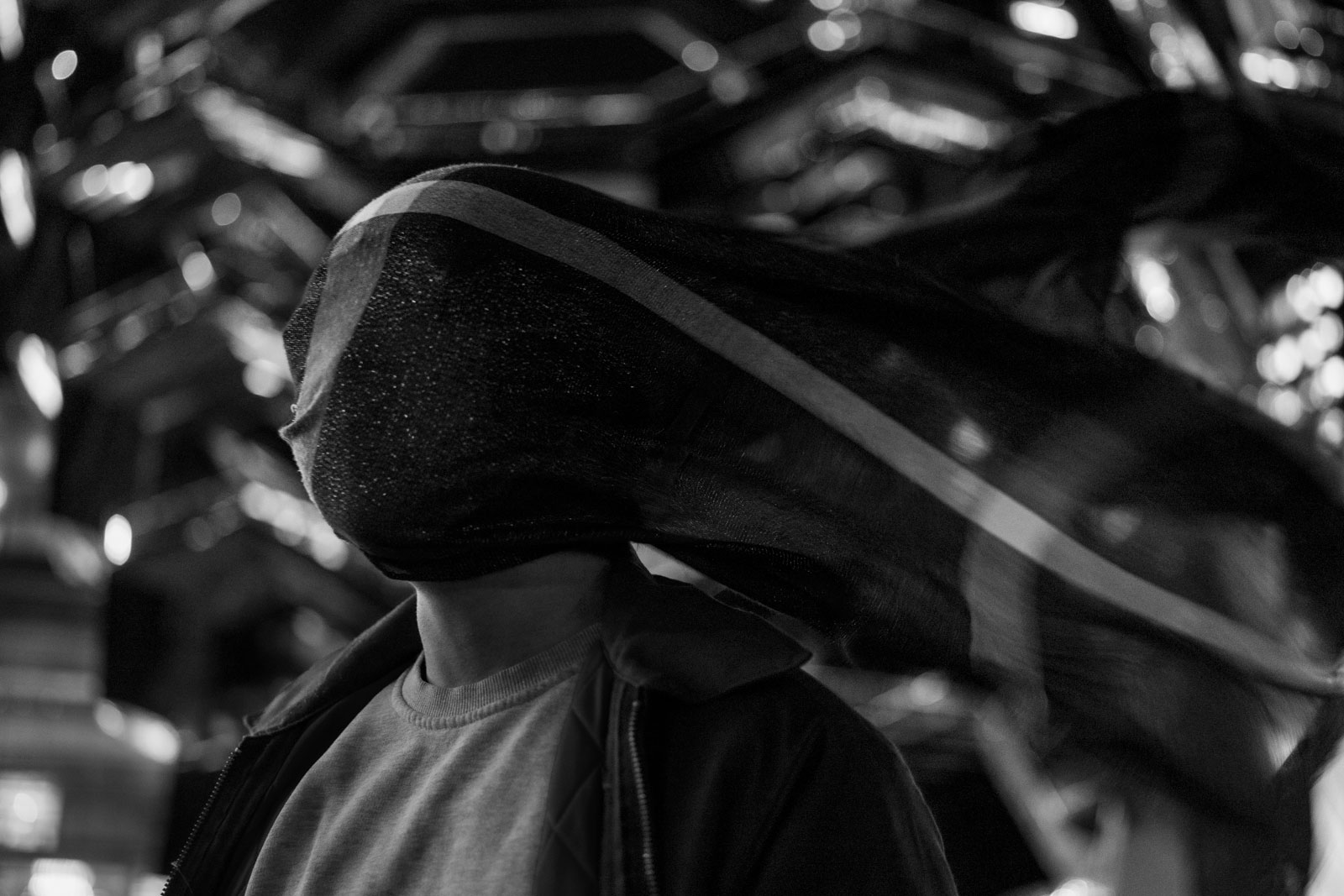 Content warning: This article deals with suicide, depression, and anxiety

The sky hangs low, and slate clouds are barreling in above South Orange. Neighbors’ dogs are barking in unison as if they’re all in on some ancient secret. Either some poor cat’s on the run, or we’re in for a deluge.

Andy Maticorena Kajie appears on screen just as the skies let loose. He’s wearing a black T-shirt and is smoothly settled into his chair. Andy — who’s coming off his first solo show at Greenhive Studio in Union City and whose work explores the human condition from the bleak to the sublime — is a reserved guy. A small smile curves his lips as he speaks in a lilting rhythm, and a pair of retro square frames give his warm and intellectual presence a sharp finish. There’s a mellow enthusiasm about him, tempered by a bassy voice, which frees him to connect with people within worlds of darkness. In that realm, unflinching, Andy’s found his niche.

Through high school, Andy faced mental health issues, and rather than shrinking from the struggle, he mined it for his work. The darkness that pervades Fabric of Affliction, his recently exhibited series, isn’t incidental. He carefully emulsifies the foggy dream of a Brassaï night scene with the edginess of today’s existential angst, not shying away from the macabre.

Often, his subjects are frozen in isolation. There’s a photo of two people on a bed, where one’s face is covered by a flowing scarf, and the other holds a bouquet of sunflowers. In another, moody and tenebristic, a scarf flows from a young man’s neck. It’s almost balletic. He titled it Noose. Intense, yes. And yet, I sense that peak Andy Maticorena Kajie that I’m to experience in our second conversation today is mountain-like, reserved. His stillness springs into full expression in pictures though, where every scene is a haunting look into the back alleys of our mind. Andy’s visual poetics show the inner world we want to forget.

He photographed much of the project with friends in New York City. “I wouldn’t want to be anywhere else,” waxes Andy, swaying his posture as rain pelts the trees outside. Though Andy grew up in New Jersey, he took a bus or train into New York regularly to make pictures, and this is where he trained his eye — taking him to School of Visual Arts over a year ago. Day by day, he’s assembling a bigger and fuller story that — if he keeps going, which he plans to — can deliver a message that every one of us feels the weight of darkness, and we can talk about it without fear or shame.

The Daring: What do you want to inspire through your work?

Andy Maticorena Kajie: I want to enable people to discuss mental struggles easily and break the stigma. The main way I want to draw people in is through beautiful images, that when looked at as a whole, create a darker narrative about the real struggle with mental health.

It happened a lot during my recent exhibition. The first night, two people walked in and they were really intrigued by the images. Then they realized what they were about and we ended up talking for a long time about mental health. About how it’s dynamic and difficult to understand and how people experience a wide range of emotions. Bringing these issues into the spotlight through conversation is the goal.

TD: You’ve said the subconscious bubbles up in your images. What’s that like for you?

AMK: My primary influence on the role of the subconscious is Graciela Iturbide. There’s a great interview with her and Ted Forbes on The Art of Photography YouTube channel, where she talks about how the subconscious shows up in her images. She has a series of self-portraits, and in one, she’d found a dead bird in her house and then bought a live one from the market and put them over her face. That image of hers is very well known. It’s called Eyes To Fly With. But she doesn’t really understand why she does things like that. She lets her intuition guide her.

She’s the reason one day, I decided to pick a random object and start taking photographs of it. And that’s how the scarf came to me. That’s how I found the scarf to be the most useful and aesthetically pleasing. Movement attracts me, and having the ability to make an object move as fluidly as a scarf drew me in before I started thinking about the implications of using it as a metaphor. It also turns out to be a really versatile tool when creating images about mental health.

TD: What do you think about as you develop a photo essay about mental health?

AMK: First and foremost, how does a single image contribute to the series as a whole? A beautiful image will be useless to me if it doesn’t build the narrative. I consider the entire story, so the edit and sequence are important.

I plan to return to The Vessel at Hudson Yards with three models and pay proper homage to the people who decided to die by suicide there. The George Washington Bridge, which has also been a popular suicide location, is another site I plan to incorporate.

I will also photograph a second couple to complement the first one in the series. I have to bring couplehood back because as more images about suicide come into the mix, the narrative will become a bit overwhelming. The couple will balance things out. It’s about it working together as a whole.

TD: How do you approach styling scenes and directing people?

AMK: When working with an object as random as a scarf, some images are trial and error because the scarf never falls the same way twice.

The least posed photo is the one of the couple. I gave them general directions to cover their faces with the scarf and to have fun. Of all the shoots I’ve done with people, this one’s been the most about going with the flow.

The most complex images to orchestrate are portraits where there’s more of a scene. It really has to do with finding the right setting, using the scarf as a metaphor, and directing people. I put myself in their shoes and we talk about how the photo will come together. I instruct people to sit in a certain location in the frame or stand in a way that invokes a particular feeling.

In the image in my living room called Disconnected, two people nonchalantly sit near each other, and yet, they’re separated by the scarf and fields of color. The narrative is about how two people can be physically close yet feel completely disconnected. Their faces are covered, so you don’t identify them with a particular person — they’re universal. In the shadows on the walls, there are silhouettes of their faces. So there’s still some form of identity. There’s still somebody suffering.

TD: What elements do you consider as you’re setting up a frame?

AMK: I think about the technical aspects. Because photography, like all art mediums, is rooted in technology. Knowing how to expose the image correctly makes deciding how to tell a mental health narrative a lot easier. It’s similar in painting. If someone has a really strong foundation in anatomy, they could morph it into whatever shape they want.

So, I’m thinking about how I will light the space. If the location is out on the street, I assess how visible it is through the camera. Can I make it work, or will I need lights? Where will I place people, where will I place the scarf? Mostly I work with what’s there. I pay close attention to the edges of my frame. If something sticks out and distracts from the subject matter, I remove it.

TD: Tell us about your use of color.

AMK: Color, specifically in the photographs with gels, I use to separate space. That’s its main purpose, and those images would not be nearly as successful if it wasn’t for the color.

Let’s also talk about the lack of color. It first started as a practical thing. Some images were not working with color, or the color wasn’t contributing anything. I need to include both. I really wanted to develop that throughout the series, mixing black and white and color together. The full scope of mental health is not something that I can depict if I were shooting only in color or only in black and white.

This conversation has been edited and condensed for clarity.

Andy Maticorena Kajie is a Peru-born Latino artist who is currently working in still and moving photographic imagery. His work mainly focuses on aspects of the human condition ranging from struggles with mental health illnesses to the ideas of the sublime and the beautiful within the real world. Visit andykajie.com

Ioana Friedman is an art director and Editor in Chief at The Daring. She’s led digital creative at Estée Lauder Companies and e.l.f. Beauty and has served in a creative capacity at Magnum Photos and powerHouse Books.

Rachel Wyman’s Meditative Return to Her Most Natural State

“You Hear All the Time, Animals Have No Voice. It’s True.”: Linda Kuo on Portraying Wildlife

Girls Who Fly: Photos Celebrating the Power of Double Dutch

The Art of Painting a New York That No Longer Exists

Inside Anna King’s Photos of Pleasure and Tedium

Nicholas Loffredo Is Broadening the Definition of Queerness

A New Kind of Historical Record

“Kolkata’s Ethnicity Is Within People in Small Areas”: Akshat Bagla on Local Storytelling